Even though I never had the pleasure of meeting Swiftrock nor watching him perform in person, I'm deeply saddened by the news I received yesterday of his passing way too soon .... 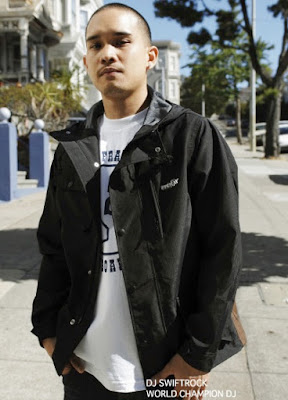 When I think of Swiftrock I remember being blown away by his juggles on the first Turntable TV video I had - The Annual Vol.1. Whilst I'd seen plenty of DMC battle/competition routines by that point - this guy was something else, so thought I'd share with you this moment of brilliance you might not have seen....
The beauty of these videos was that back then, any DMC tapes we got hold of gave us showed us multi-skilled and well-rounded DJs, but Turntable TV (TTTV) was our chance to see a select few (Q-Bert, Mixmaster Mike, D-Styles, Shortkut, DJ Flare & Melo-D) who, as well as being incredibly well-rounded and decorated battle DJs themselves, all excelled in a specific part of the  artform - Scratching.
They were taking it to a level that no one in England had really seen before at the time, and this was our chance to see them practicing and showcasing without the pressure of competition, and the fun and frolics they got up to on tours (not to mention also being hilarious tapes). What they also did though, was showcase their boys from the Bay Area from time-to-time or anyone they invited to their studio and this is where I first saw Swiftrock and the rest of his crew the Supernatural Turntable Artists (S.T.A). Again, I'm sure most of my collection of these not cheap, but essential videos came from the excellent Mr Bongo in Soho, London.


Such a deeply-thought out, polished and musical routine with so much attention to detail. It stuck in my head for ages, I could've easily whistled out a rendition of the tune had anyone asked me to a week ago! (What's infuriating now is that I only recently heard the original tune he's cutting up and now it's gone from my head, so if anyone can enlighten me, please do in the comments!) I did look out for Swiftrock online over the last few years and from what I could gather he was doing a lot of turntablism teaching and classes lately.

Bar guys like Roc Raida, Pogo, Cutmaster Swift and Slyce for example, at this point in '97 no one in the world DMC tapes I'd seen was juggling to this advanced level so this routine just grabbed my attention straight away and I couldn't watch it enough - Just click play below and watch when he freaks it at 1:22:23 for example, I remember showing that part to anyone who would listen!

Whilst looking at some old footage of him on youtube I read in the comments he's also the first to use reverse patterns in juggles - if there's any nerds out there reading can you confirm?
You can also hear some of Swiftrock's mixes over at his Mixcrate account here. These are a couple of my personal favourites -
I leave you with a couple more clips of the master. It would also be right to show Swiftrock in perhaps his finest hour, being crowned champion at the Vestax world Championships in Tokyo in the latter clip. Enjoy this phenomenal set... my thoughts go out to the family of the musical genius Swiftrock, R.I.P.....
Posted by ABBFunk at 20:00