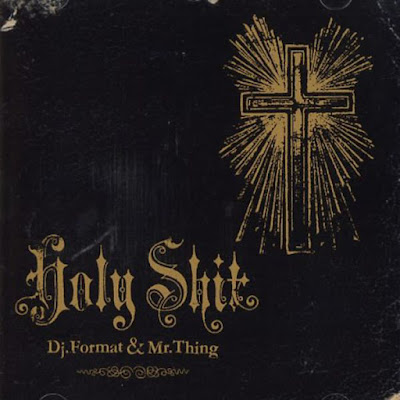 Missed this one first time around...


'Holy Shit' is a mix of religious breaks, beats & music discovered mostly in charity shops and bargain bins of record shops over a number of years. I had been planning to do a mix of some of my weird & wonderful religious records for years and when i got chatting with Mr Thing about a new exciting discovery i had just made in a Leeds charity shop,it turned out he too had recently discovered the same religious LP!
We decided to team up and do a mix together and Holy Shit was the result.
Although some of the music is top quality and was cut up in a B-boy style,the mix was definitely supposed to be fun..hence the Monty Python bits! It was released as a CD in 2009(?) and is now available for free download for the first time.
The term 'Religious Record' could mean a religious artist on a religious record label that had an unusually funky moment or it could mean a regular artist or group (not usually associated with the religious genre) that do a cover version of a song about God or Jesus i.e. 'Put Your Hand In The Hand' is a religious song covered by many different artists and quite often has a nice open drum break at the start of the song.
Ps..There's a 1 minute silence at the end of the mix before a secret bonus track comes in at the end. This was deliberately done on the original CD for fun..rather than it being a manufacturing fault like some people (idiots who returned the CD as faulty!) seemed to think.
released January 4, 2007"

Also. on a similar tip-