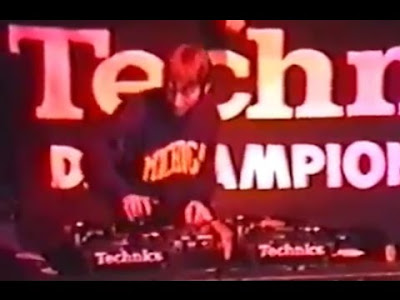 Found a great YouTube channel with a tonne of golden era DJ Battle footage, check some of these out....

Massive respect to Michael Shum for putting all these videos online, be sure to subscribe and support his channel.

Having become a fan of battling in '96/97 after I got given the DMC '96 finals tape and being amazed by Denmark's DJ Noize, I had never really looked back at older battles, only catching winning sets on highlight compilations etc.

So this was a great find, as I found some really early Prime Cuts footage and DJ Kofi amongst many others. Prime Cuts being a legendary UK DJ and Scratch Perverts member who many, including myself hadn't seen battle footage of prior to his winning year of '98, and Kofi is something of a fan favourite amongst the various mix blogs doing the rounds.

Got lost for a good hour or so in all the available videos on this channel. Anyone who was a fan of battling around the late 90's/00's will know all about the best ones so here's a selection of the rarer ones or less well-known...