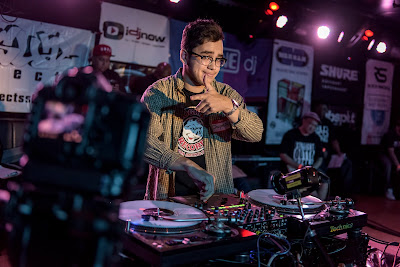 Been using various social media applications for years to either plug my own DJ work or follow other musicians I admire, however much like the Myspace days I've come to the end of the road with Facebook....

I know everyone on Instagram's a DJ nowadays, but here's why rarely a day passes for me without quickly checking my IG and some DJ profiles that stand out from the rest....


Content and my attention span
The 1 minute limit on videos just works really well for me and scratch/DJ routines I wanna see. Nowadays, unless it's by someone like Vekked with such an eye for detail that it's impossible to be bored for one second of his routines, a 6 minute DMC submission can be really hard to watch all the way through, and don't get me started on 15 minute Red Bull thre3style sets....

Hence a 6 minute, or even a 2 minute routine requires huge amounts of prep and rehearsal before it's shown to the masses, and we're so spoilt now after 20+ years of incredible turntablism routines I think I speak for everyone when I say we tend to move onto the next one when something's not to a certain level. Therefore I find great DJs, who are often perfectionists by nature, are really happy to put out something of a quick 30sec to 1 min timeframe, which means tonnes of great content for us viewers and fans, and meaning we don't have to wait for DMC to come around to see something new from our favourites...

Stories
On the theme of "throwaway ideas" or something that's not quite polished, you'll find a lot of great content in the stories section of people's profiles. They might not be OK with setting a routine in stone on their profiles and leaving it to be watched and critiqued by their rivals, but these disappear after 24 hours and you can find some great scratch content here. They are a bit frustrating to use at first but are worth persevering with. A user's circular profile pic is outlined in red if there's new content to view, see pic.

One DJ especially who has embraced the stories on IG is Dopez1200 - DJ Dopez out of Texas...Aside from being one of the most ridiculously talented Scratch DJs on the planet, the content of his stories is constantly being updated and I for one have learnt loads from the tips he shares there. It seems his 5k followers agree.

All that said, and aside from Dopez, here's a few more great DJs really embracing IG in my humble opinion and definitely recommended to follow. So many experienced battle DJs are now embracing the idea of giving back to the community and Instagram is a great place to absorb all that passed-on knowledge.

Given I'm a self-confessed scratch nerd these are mainly scratch-focussed but I've also added a couple of others at the bottom. I've no doubt forgotten someone, so will add to this list from time to time!

Disclaimer  - This isn't about best or worst, please don't be butthurt if you're putting in work but don't get a mention! This is about who's most active on IG (that I've found) with excellent content that I've learned shedloads from...

Lot of great content from a multi-talented scratcher and turntablist Flip Flop. Watch out for FlipFlop, he's quietly sneaking up on the battle scene and is a great shout for US DMC champ very soon....He also gives lessons so get in touch if you're interested...

Featured recently on the blog for his showcase on the Boom City scratch documentary series, Germany's Robert Smith posts quality scratch routines almost daily. He effortlessly cuts up rap lyrics with so much musicality and cleanliness and quickly became one of my favourites, + 7.5k others apparently.

One of the best in the scratch business Enfoe's skills are heralded by many of the best, incredibly technical and much of what he does goes way over my head but he regularly adds great freestyle content and is well worth following

Every scratch DJ either is or knows a big fan of France's R-Ash. Not so much of late but he regularly added a lot of freestyle cuts on his story, hopefully it continues....

@dj.Yocchi
With a style not unlike QBert, Japan's DJ Yocchi regularly posts a lot of excellent scratch freestyles

Japan's DJ Yuichi, now based in the US, is a master of stabs and regularly posts quality freestyles, check him out!

Im a huge fan of former DMC USA vice champ Manwell, and very envious that he's the pharcyde's tour DJ, (any followers of the blog will know their first album is probably my favourite ever) but the fact of the matter is noone deserves that gig more, as Manwells's got crazy all round skills. Featuring a bit of everything, his IG account gives a great insight into his workflow as he posts a load of outtakes and quick flips or live looping routines.

And those others I mentioned, check these 45 manipulators! 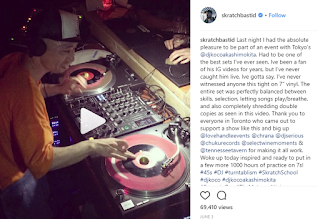 Japan's DJ Koco's break and hip hop mixes have been featured on this blog in the past and on the Mixtape Unites blog, we're all huge fans, but almost daily he showcases the ease at which he seamlessly blends between 45s, always great to watch

Just check out the highest praise from Skratch Bastid;

The UK's own Boca 45 regularly posts videos where he's practising with the latest 45s he adds to his collection, a great way to learn from a great DJ and see how he adds the new tracks to his sets.