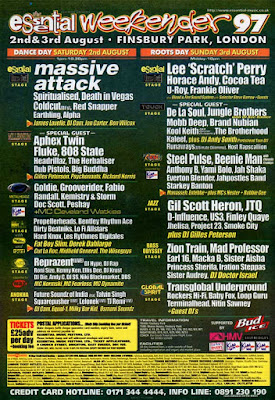 This show really took me back... The JB's in the studio with Westwood... They talk about one of the great festivals and rap line ups during that time, Essential Festival in Stanmer Park Brighton, 1997.

I remember going to this one and the follow up in '98 in Finsbury Park London. These were great days out, with a tonne of big artists on the same bill and I think a ticket didn't cost more than £20 at that time. Touch stage featured De La Soul, Brand Nubian, Kool Keith Ice-T, Jeru, JB's, Courtney Pine, Brand New Heavies etc..

At this time I would go to rap concert after rap concert but deep down I was mainly interested in who was the DJ and if they'd get a few minutes to shine, as they mention Roc Raida was given some exposure on this tour and killed the set for the JB's, such a big influence on me back then and one of those defining moments where reinforcing my urge to DJ!

More on the event here

Think it was the one in '98; every act went over which left no time for Coolio & the 40 Thevs, they got so pissed off with everyone telling them they had to stop that they threw all their nice cordless mics into the crowd, not to me unfortunately... Sadly it looks like the company that put on the festivals went into liquidation, I imagine they didn't get those mics back!