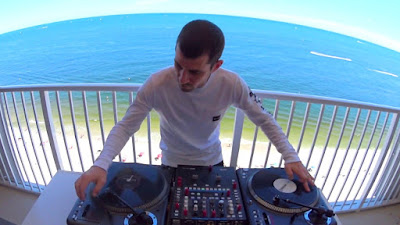 I'm always really keen to check the DMC online finalist's videos and even more so this year that I got some time to put a routine together myself.

I thought Skillz and Throdown would storm my round (round 6) and it seems they did, although I liked Throdown's 2 minutes slightly ahead of Skillz, but the judges thought otherwise.

The following top 5 are my choices (in no way linked to the judges' scores) along with some of my observations, sick routines throughout!!

In much the way Vekked's winning routine did last year, I think this will take the title by a comfortable margin. No prizes for guessing that, it's been getting some amazing feedback online, a ridiculous amount more views than anyone else.

It's being raved about for the use of various tech all at once, (fretless fader, controller one and foot pedals). I'm not really bothered what's being used to be honest so wouldn't give any "bonus" points for that - It's just a really, reeeally well put-together routine. You could listen to this on repeat without the visuals, it's that good and musically on point. Cuts are so precise and its just a top drawer composition all around.


Just some ill, ill use of the upfaders and trick mixing, the likes of which I don't really remember seeing to such an expert level and I think it's going to be rewarded with second place.

A lot of talk about the style of music (it's not everyone's cup of tea) but this guy's got some really great ideas and does this whole routine pretty effortlessly. If he gets his scratching to the level of the other guys and diversifies the musical selection a bit then he could nail it in 2017, but hats off to him doing his thing regardless!

Third place was probably harder to call than 1 & 2 and to be honest, it could be any of Ruftone, Spell or Skillz for my money. I'm going with Ritchie because (as far as I know) this is all new material put together for the battle and it's catchy as fuck.

I've never seen Game of Thrones but even I found myself humming his Game of Thrones part at work today, the routine has definitely grown on me. I think he gets my nod ahead of Spell and Skillz for his dexterity with the scratches at the end, lifting the upfader to catch the beats at the same time, pretty smooth!! Ritchie always has an excellent balance of new style techniques with the older style and it always works perfectly, I'm rooting for him every year and hopefully in 2017 he gets even closer to the title!


Ahh loved this routine. I've given it the nod ahead of Skillz for the cue point drumming/playing which, unlike the usual basic drumming in you see in routines he puts together such a funky take on Bowie's "Fame" (from 1:38). Like Ruftone's this definitely grew on me over time... Lot of stage presence and personality and concept to his routines!


Responsible for blowing away the competition in round 6, Skillz put such a tight 2 minute set together so I was really looking forward to his 6 minutes for the final and it didn't disappoint.

This routine is so clean, all his scratches are on point and it has a lot of memorable moments. I just gave Ruftone & Spell the nod for what, in my opinion, incorporated a couple of slightly more innovative and riskier ideas. Don't get me wrong this routine is ridiculous and could win on many years of this competition!

Another worthy contender but didn't quite make my top 5 is Erick Jay, whose sets I always enjoy watching as he's one of what I'd call the "traditional" beat jugglers. He's a very solid all-rounder who shows he's adept at scratching with both hands and the juggle from 1:43 onwards was the highlight for me.

Throdown who for me was a real standout from the public voting (round 6) so this was one of the first routines I wanted to check. It has the comedic value and he throws in a few nice (NSFW) disses which was a cool throwback to that old DJ Dummy routine at the US Finals!

I think in what's really a commendable move of trying to show new stuff and not just extending his 2 minute set he hasn't quite captured the impact of his 2 minute set which I thought was a lot tighter and pulled off better - but given he only would have had a week to submit a 6 minute routine after finding out he got through the public voting round it's still a great effort and I'm a big fan!
Posted by ABBFunk at 01:49